Pempheris ornata n.sp. is described from 34 specimens collected at sites along the southern Australian coast, from Rottnest Island in Western Australia east to Rapid Bay, South Australia. The scales of this species are cycloid, deciduous, and large, the last characteristic resulting in uniquely low counts of 32–39 lateral-line scales. It is also immediately separable from other Pempheris by: 6–7 yellow-orange or golden-brown stripes on anterior body, reducing to three stripes on caudal peduncle (stripes dark brown in preserved specimens); body cream-coloured or transparent; dark linear light organ visible through body wall between pelvic- and anal-fin origins, with a slight bifurcation around anus; segmented anal-fin rays 27–30; 14–17 circumpeduncular scales. Pempheris ypsilychnus n.sp. is found from Shark Bay in Western Australia, along the north coast to Cape York, and south to Moreton Bay in Queensland. It is described on the basis of 63 specimens and is distinguished from congeners by the following combination of characters: scales ctenoid and adherent; pelvic axillary scale present; dark Y-shaped light organ visible through body wall between pelvic- and anal-fin origins, with wide bifurcation around anus; gill-raker counts on first arch 6–8 + 19–22 = 25–30 (usually 26–27); lateral-line scales 62–74 (usually 63–69). Although the exact membership of the genus is questionable at this time, a provisional key to the Australian species of Pempheris is provided. 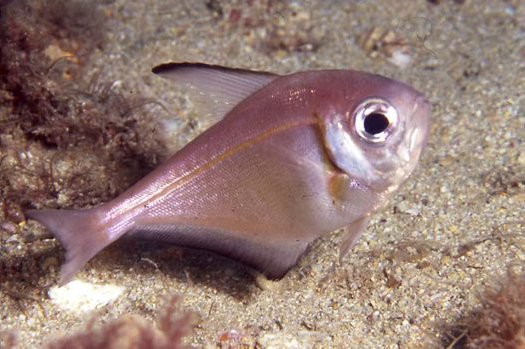 Revision of the labrid fish genus Pseudolabrus and allied genera

IX. The Enteropneusta. Part I

Papers from the Echinoderm Conference. 12. The shrimps associated with Indo-west Pacific echinoderms, with the description of a new species in the genus Periclimenes Costa, 1844 (Crustacea: Pontoniinae)

Phylogeny for the tribe Thophini (Cicadoidea: Cicadidae) with the description of a new subspecies of Thopha sessiliba Distant from Western Australia