The Gondwanan World Heritage rainforests of Australia's subtropics support an invertebrate biota that reflects diverse evolutionary histories. A high proportion of the fauna is identifiably autochthonous in origin. Four major generalizations, as to the invertebrate "values" of the Central Eastern Rainforest Reserves of Australia (CERRA) World Heritage Area, can be derived from the taxonomic and biogeographic information acquired during this project: (a) The CERRA region, loosely defined as that area extending from the Barrington Tops, northern New South Wales, to southeast Queensland, is a significant zoogeographic refugium in terms of the evolution of Australian invertebrate taxa. Examples occur extensively within the taxa listed in Appendix 1 and are discussed in the Overview. Particular examples are the terrestrial snail family Charopidae, the freshwater snail family Hydrobiidae, the beetle taxa Adeliini, Cyphaleini, Coprini, Denticollinae, Rutelinae, Melolonthinae, Lucanidae, flightless beetles in the family Carabidae, the fly family Drosophilidae and dolichopodid subfamily Sciapodinae, parastacid crayfish, aradid bugs, the Onychophoran family Peripatopsidae and mygalomoph spiders. (b) The CERRA region includes a high proportion of taxa with "Gondwanan" or "Old Southern Endemic" affiliations. This group includes taxa with relatives on other Gondwanan landmasses such as South America, Africa and the Indian subcontinent, and those restricted to Australasia. Some taxa are restricted to Australia but with close relatives in either New Caledonia or New Zealand, but not both. Within known ranges, individual taxa can be widespread or relictual. Examples of "southern" fauna exist across all taxonomic levels—from species to that of subphylum. Notable higher taxonomic rank examples are the megascolecid earthworms, mygalomorph and amphectid spiders, harvestmen in the family Acropsopilionidae, the mite family Pheroliodidae, and the terrestrial snail families Athoracophoridae, Charopidae, Cystopeltidae and Rhytididae. The insects are well represented, and include the beetle family Phloeostichidae and tribes Pamborini, Migadopini, Adeliini, Epistomentini and Stigmoderini, flies in the family Pelecorhynchidae, the subfamily Arachnocampinae and the tribe Pangoniini, the moth families Hepialidae and Micropterigidae, the "birdwing" butterfly genus Ornithoptera, the hemipteran bug families Idiostolidae and Peloridiidae, the neuropteran lacewing subfamilies Kempyninae and Stenosmylinae, ambositrine and hyptiogastrine wasps, and the plecopteran families Austroperlidae, Eustheniidae and Gripopterygidae. (c) There is a substantial level of endemism within the fauna. This is very high at the species and genus level, and many of these are currently known only from single localities or from geographically restricted ranges within the CERRA region. Instances of generic and species endemism are particularly high in the snail families Hydrobiidae and Charopidae, the earthworm family Megascolecidae, the crayfish family Parastacidae, the subphylum Onychophora, and the spider suborder Mygalomorphae. Examples within the insects are the fly families Dolichopodidae, Platystomatidae, Exeretonevridae, Pelecorhynchidae and Tipulidae, the beetle tribes Onthophagini and Scarabaeini, the beetle family Carabidae and subfamily Melolonthinae, australembiid webspinners, cicadelloid and mezirine Hemiptera, oechophorine moths, and the lacewing family Hemerobiidae and the subfamily Kempyninae. The beetle family Rhinorhipidae, and the mite family Platyameridae, are restricted to the CERRA region. (d) Significant invertebrate heritage values are not restricted to taxa inhabiting rainforest vegetation. The intervening matrix of sclerophyll forests, and more rarely woodlands, shrub, heath and swamp complexes, and associated freshwater ecosystems, sustain distinctive non-rainforest invertebrate heritage values. Important higher taxa inhabiting these ecosystems are ruteline "christmas beetles" in the tribe Anoplognathini, the family Elateridae, the speciose buprestid genus Castiarina, the tenebrionid tribe Heleini, the fly genera Pelecorhynchus and Trichophthalma, and athoracophorid, helicarionid and glacidorbid snails. Limestone outcrops are important focal points of terrestrial snail endemism and diversity. Cave systems are important for the conservation of associated, often endemic or localized, arachnid and insect faunas. 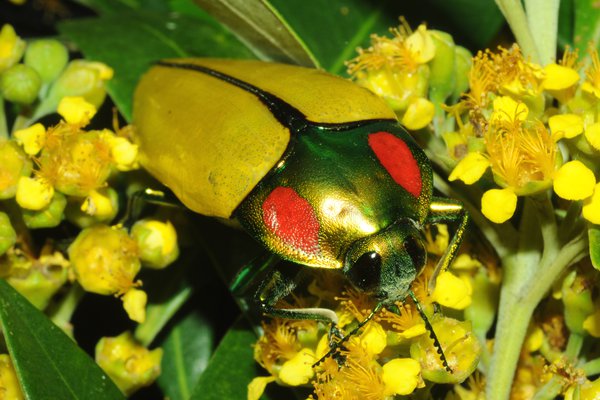 The Flowering of Australia’s Rainforests

Invertebrates are essential in pollinating our rainforests – but how do climate change, fire, fragmentation, invasive species and destructive pathogens impact pollination networks? Dr Geoff Williams OAM, AM, explores how in this Second Edition of The Flowering of Australia’s Rainforests.

A review of the scincid lizards of New Caledonia

The Australian Sciapodinae (Diptera: Dolichopodidae), with a review of the Oriental and Australasian faunas, and a world conspectus of the subfamily

Wildlife conservation in the south-east forests of New South Wales

A rainforest tree by the sea — Who are the pollinators?

In Australia there are over 40 species of mangroves; despite their key role in coastal ecosystem function, we know relatively little about their reproductive ecology. Learn more about the pollinators involved, in this recent and pivotal study.

Australian scientists lead an international team that has described and named two new species of gigantic woolly flying squirrels from the Himalayas.

31 May 2021
Read more
Back to top
You have reached the end of the page. Thank you for reading.