The eastern freshwater cod, Maccullochella ikei, from the Clarence River system, NSW, is described and M. peelii mariensis is described as a new subspecies from the Mary River system, Qld. The Murray cod, M. p. peelii and the trout cod, M. macquariensis, are indigenous to the Murray-Darling River system. Using electrophoretic data for 19 presumed loci, the coefficient of genetic identity between M. p. peelii and M. ikei was 0.72 and the banding-patterns of the muscle general protein, liver esterases and five other enzymes, were species-specific. A high proportion of abnormal and inviable hybrid larvae in a cross-breeding experiment indicate that post-zygotic isolating mechanisms have evolved between M. p. peelii and M. ikei. The coefficient of genetic identity between M. p. peelii and M. p. mariensis was 0.85 and banding patterns of muscle general protein were diagnostic. Canonical variates analysis using 18 morphological and nine meristic characters, clearly separated both species and the subspecies. Maccullochella ikei is distinguished from M. p. peelii by having longer pelvic fins, larger orbit length, and larger and morphologically distinct sagittal otoliths. Maccullochella p. mariensis differs from M. p. peelii by the combination of a deeper and shorter caudal peduncle, longer pelvic fins, larger sagittal otoliths and lesser extension of the first anal pterygiophore towards the first caudal vertebra, and from M. ikei by the combination of a deeper caudal peduncle, greater postorbital head length, smaller orbit, larger interorbital width, fewer scale rows below the lateral line, shorter fifth-sixth dorsal spine and lesser extension of the first anal pterygiophore. Although each species has distinctive colouration and mottling, there is some intra-specific variation. Maccullochella macquariensis is distinct from the other species by having a straight head profile, jaws of similar length, 14 precaudal vertebrae and distinctive colouration. There was a dramatic reduction in the distribution and abundance of cod in the eastern drainage during the early 1900s and cod were probably extinct in the Richmond and Brisbane River systems by the end of the 1930s. Maccullochella ikei and M. p. mariensis are each represented by one, small population. Possible causes of the decline, and the management strategies taken to conserve the endangered M. ikei are discussed. 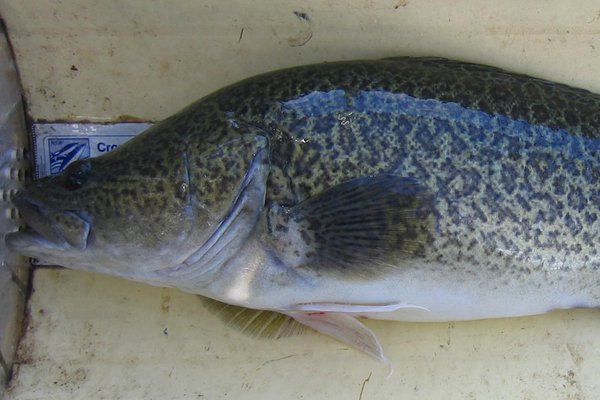 Australian Bass are a popular angling species that occur in coastal drainages of temperate south-eastern Australia.

Cymodetta gambosa, a new sphaeromatid isopod (Crustacea) from Australia, with notes on its mating behaviour

A new subspecies of Neolucia hobartensis (Miskin, 1890) (Lepidoptera: Lycaenidae) from mainland southeastern Australia, with a review of butterfly endemism in montane areas in this region

A new genus and species of Athericidae (Diptera: Tabanoidea) from Cape York Peninsula