Three new species of anthiine fishes of the genus Plectranthias are described from Australian waters: P. robertsi from 220-400 m off Queensland at 18-23°S is distinctive in having 15 dorsal soft rays, 16 pectoral rays, 32-35 lateral-line scales, filamentous upper caudal rays (easily broken) and extremely prolonged second dorsal and second pelvic rays in the male; P. pallidus, represented by a single specimen taken in 220 m off Townsville, is characterised by 16 dorsal soft rays, 13 pectoral rays, 28 lateral-line scales, 2 retrorse spines on the ventral margin of the preopercle, and the third dorsal spine longest, 2.0 in head length; and P. lasti from a specimen off Marion Reef, Queensland in 365-370 m and one from the Northwest Shelf in 202 m, is distinguished by having 14 dorsal soft rays, 15 pectoral rays, 30 lateral-line scales, no serrae on the preopercular margin, and a body depth 3.05 in SL.

Studies on the Zoarcidae (Teleostei: Perciformes) of the southern hemisphere. VII. A new species of Dieidolycus Anderson, 1988 from the Bismarck Sea

The following papers published in 2007 have used specimens from the Australian Museum fish collection. 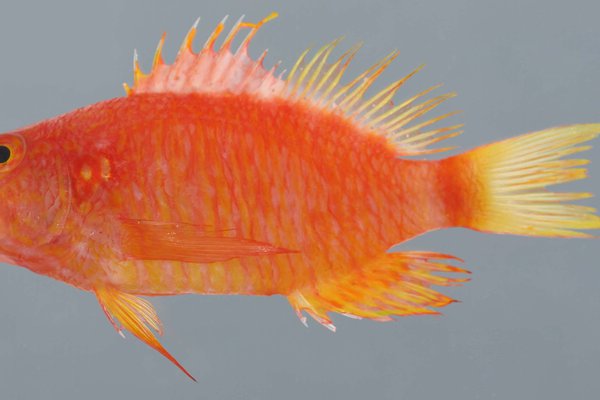 The jigsaw: putting together the Bloody Perchlet puzzle

Museum collections provide a treasure trove of undiscovered species, and in this case the newly discovered and beautiful Bloody Perchlet, Plectranthias cruentus, was a jigsaw puzzle put together from old and new.

The 2014 publications in the list below all cite specimens from the Australian Museum fish collection.

The following papers published in 2000 have used specimens from the Australian Museum fish collection.